Meeting with the representatives of the Netherlands Embassy Office in Chișinău 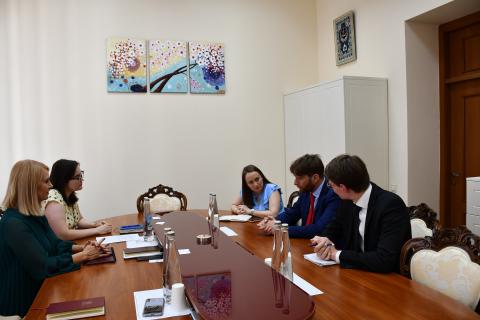 On Friday, 22 July 2022, representatives of the Embassy Office of the Kingdom of the Netherlands in Chisinau: Mr. Floris van Eijk, Head of Office, Mr. Jorin van den Heuvel, Officer at the Ministry of Foreign Affairs of the Kingdom of the Netherlands and Ms. Ecaterina Vâlcu, Senior Political Affairs Officer visited the National Institute of Justice. On behalf of the National Institute of Justice, Mrs. Ecaterina Popa, ad interim Director, Mrs.Valentina Conțescu, Head of the Institutional Management Department, Mrs. Olga Marandici, Head of the International Relations Section and Ms. Cezara-Elena Polisca, Head of the Didactics, Methodological and Training of Trainers Section attended the meeting.

During the meeting, were discussed the Institute assistance needs in order to carry out the justice sector reform. In the context, Mrs. Ecaterina Popa spoke about the main actions that are underway and that aligns with the imperative of time.

In addition, the ad interim Director thanked the representatives of the Office for the initiative to explore new collaboration opportunities that will increase the institutional capacity and the quality of the National Institute of Justice training processes.

For his part, Mr. Floris van Eijk mentioned the essential role of the Institute in the ambitious justice reform agenda, including the vetting process of judges and prosecutors. At the same time, he had noted the contribution of the NIJ in the promotion of European standards in judicial training and expressed his openness to support the NIJ in achieving the proposed objectives.