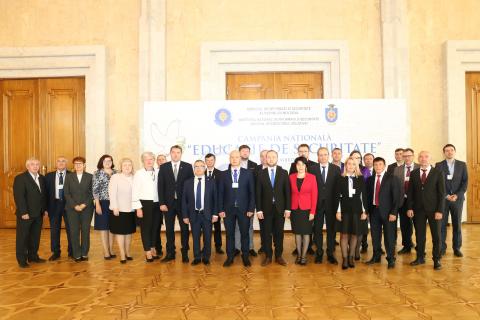 Wednesday, September 7, 2022, the members of the academic community met with the management of the Intelligence and Security Service of the Republic of Moldova in order to initiate the national campaign "Security Education". Among the campaign partners was also and the National Institute of Justice, represented by, Ecaterina Popa, ad interim Director and advisor of the Director, Head of the didactics, methodically and training of trainers Section, Cezara-Elena Polisca.

In her speech, Ecaterina Popa welcomed the initiative, mentioning that strengthening culture and enhancing professional skills in the field of security is one of the priorities undertaken by the NIJ on the basis of national strategies and policy documents. Furthermore, as a result of the Collaboration Agreement signed between the National institute of Justice and National Institute of Intelligence and Security „Bogdan, Întemeietorul Moldovei” (NIIS), 242 NIJ beneficiaries were trained on the specific segment within 11 training activities.

National Campaign "Security Education" aims to familiarize the young generation with the types of threats and risks to the security of the state, with phenomena such as cybersecurity and the impact of fake news, including the concept of security culture. At the end of the event, was signed the Declaration of members of the academic community regarding the creation of the national communication network for security education, which will serve for promotion of the security culture through education, using various methods aimed to stimulate the individual interest, institutional cooperation with civil society, the adaptation of the educational programs but also editorial and publicity activities.